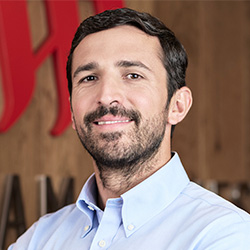 Carlos Homet Beltrán is the Country Manager of Unibail-Rodamco-Westfield in Spain since July 2022. With a degree in Business Administration and Management from ESADE, he has more than a decade of experience within the group. After working for Sanofi, he joined URW in 2011 through the European Graduate Programme and later as a member of the operations department. In 2017 he was promoted to Head of Operating Management. In January 2021 he was appointed Leasing Director in Spain.

Retail
Newsletter
All news from THE DISTRICT in your mail!
Subscribe to our newsletter to be up-to-date about that happens at The District